Which printers are capable of using ZBI 2.x?

What are some of the new features with ZBI 2.x?

How can I determine if my printer is ZBI enabled or just ZBI ready?

Where can I download a copy of the ZBI manual?

I need additional help.   Where can I obtain some programming examples?

How can I stop a ZBI program that is running on my printer?

Do I need a printer to develop a ZBI program?

What is the Zebra ZBI-Developer and where can obtain it?

What are the system requirements for the ZBI-Developer program?

How do I install the ZBI-Developer program?

Where can I download the manual for the Zebra ZBI-Developer program?

How can I encrypt my ZBI program?

Where can I download the ZBI Key manager program?

How do I distribute keys using the ZBI Key manager?

I don't want to do the programming.  Are there any resources available at Zebra that can be contacted that can develop a customized application for me?

(PLEASE NOTE THAT FIRMWARE ALONE DOES NOT GIVE ONE THE ZBI 2.0 OPTION.  ZBI STILL NEEDS TO BE ENABLED!!!)

A ZBI key can be purchased at  www.zebrasoftware.com  - or printers can be ordered from the factory with ZBI 2.0 Enabled.

These are the supported print servers:

ZBI Developer is an Integrated Development Environment (IDE), designed to assist in the creation, testing and distribution of programs written for use in the Zebra Basic Interpreter (ZBI) .

ZBI-Developer is a free download that can be obtained at http://www.zebra.com/

The following are the minimum requirements for ZBI-Developer

ZBI-Developer can be installed from a downloaded copy or from a CD-ROM containing the software.  Before starting the ZBI-Developer installation, close all other software applications. This ensures a complete installation of all of the program files.

The complete installation package can be downloaded from http://www.zebra.com/

Note: If you are using Windows 2000, Windows XP, Windows Vista or Windows Server 2003 you must log on with Administrator rights to perform the installation.

During the installation follow the prompts the user for the location to install the software to and other options. If you change the location the software installs to from the default location, be sure to note the new location as this information will be helpful to have for backup and archival purposes. 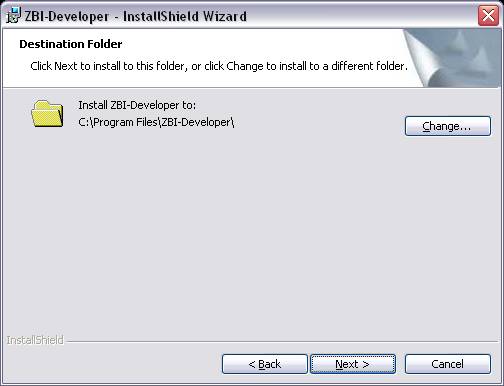 Once the installation is complete, click Finish to complete.

ZBI-Developer offers the ability to execute a ZBI program on the PC with no printer required. The Virtual Printer system makes it possible for the user to control the inputs and view the output of their program - all without having a printer attached to the computer.

Additionally, the Virtual Printer system makes it possible to connect devices to the PCs' RS-232 Serial or Parallel ports and direct input from those ports into their program. For example, if the ZBI program being written will need to accept data from coming into the printer via the RS-232 Serial port from a weigh scale, that event could be simulated by attaching the weigh scale to the PC and configuring the Virtual Printer to accept data from the computers serial port.

Next, if a printer is available, but it not yet ZBI-Enabled, the Virtual Printer system allows the output of the ZBI program to be sent to the computers parallel or serial ports to a printer. For example, a ZBI program could be written to send output to the printer label formatting engine - while the Virtual Printer is configured to take that same data and redirect it to the computers serial port to a printer attached to that port. In this way, the label formatting commands that are frequently the output of many ZBI program can be tested, even if a ZBI-Enabled printer is not immediately available.

NOTE: It is recommended that Projects and Project files be backed up on a regular basis. Zebra Technologies and ZBI-Developer do not automatically back-up files or offer a method for un-encrypting programs if the Encryption Key is not available.

ZBI-Developer can encrypt ZBI programs for use on printers that support ZBI 2.0 and above. The purpose of this feature is to allow the programmer to protect the source code of the program once it has been deployed to printers. Programs that have been encrypted are represented in the ZBI-Developer environment with the "encrypted ZBI program" icon

instead of the standard ZBI program icon

While the encrypted program will remain in plain text in the ZBI-Developer environment, it will be encrypted and MIME encoded when it is sent to the printer.

ZBI Developer has a unique encryption key that is created when the program is installed. This key is the default key used when a ZBI program is encrypted - unless another key has been created.

NOTE: It is recommended that the Default Encryption Key be used rather than creating additional keys. This approach is recommended to make the task of managing the keys easier over time.

Encryption keys can be shared between users in one of two ways:

The key file can be copied from one machine to another. This approach is recommended when program development and encryption will be done from remote locations.

The key file can be stored on a networked drive, made available to any of the programmers to use.

To encrypt a ZBI program, right-click over the program and choose "Encrypt ZBI Program". The program will display a Warning dialog as shown below:

Next, the program will offer the choice to use the Default Encryption Key or create to Generate a New Key. 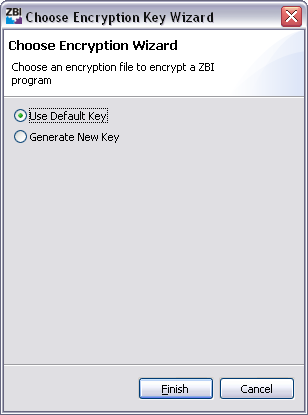 NOTE: It is recommended that the Default Encryption Key be used rather than creating additional keys. This approach is recommended to make the task of managing the keys easier over time.

Choose which Key to use and click Finish to complete the Encryption Key Wizard. The ZBI program will be marked as encrypted. When it is sent to a ZBI 2.0 printer, it will be encrypted and MIME encoded.

For example, the program from the ZBI-Developer tutorial looks is shown below in plain text form:

When encrypted and stored on the printer, the program takes on the following form:

How to stop an auto running program

Many times programmers initiate ZBI programs with the use of an autoexec.zpl program.  This causes the  ZBI program to be launched immediately upon boot-up.

Another method that can be used to stop a ZBI program from executing on Boot-Up is to place the printer into Communication Hex Dump Mode as the printer is powered on. See your user guide for this procedure. Once in Hex Dump mode the ZBI program will not be running. You can then send a ~JE to exit Hex Dump and then ~JQ to Terminate the ZBI function.

An easy way in which one can determine if ZBI (Version 2) is currently enabled on a printer is to print out the printers configuration label.

Starting with .16 firmware there will be a section of the configuration that shows ZBI related data.   The printers configuration can be printed by utilizing the "LIST SETUP" menu item on the front panel display.

Additionally, there will be a file stored in E: memory called ZBI.nrd.    The ZBI.nrd file will be present on the printer for ZBI 2.0 to be enabled. The ZBI Key is stored on the printer's E memory location with the name "ZBI.nrd".   The file is persistent.  A persistent file is one that  will not be deleted if the printer's memory is initialized. For example, if the ^JB command is used to initialize the E memory location, the ZBI Key file will not be deleted.

Note: Each single ZBI Key can only be used once. When multiple printers are to be ZBI-Enabled, multiple Keys will be needed. The ZBI key cannot be retrieved from printer to a host system. 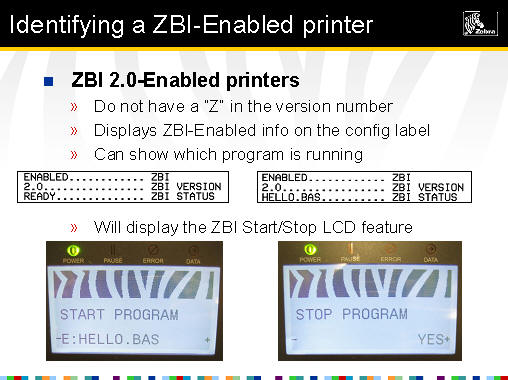 When a user buys a Key from the on-line site, they need to also download a Firmware Download Manager Utility to put the key onto the printer. This is used in the following way:

I should note that this process is the same process a user goes through when they buy a ZBI Key Kit. The ZBI Key still has to be authenticated via the web and then distributed to the printer(s) of their choice.

Note: Each single ZBI Key can only be used once. When multiple printers have a need to be ZBI-Enabled, multiple Keys will be needed.

Further, the ZBI key cannot be retrieved from printer to a host system.